We Gotta Get Out of This Place. 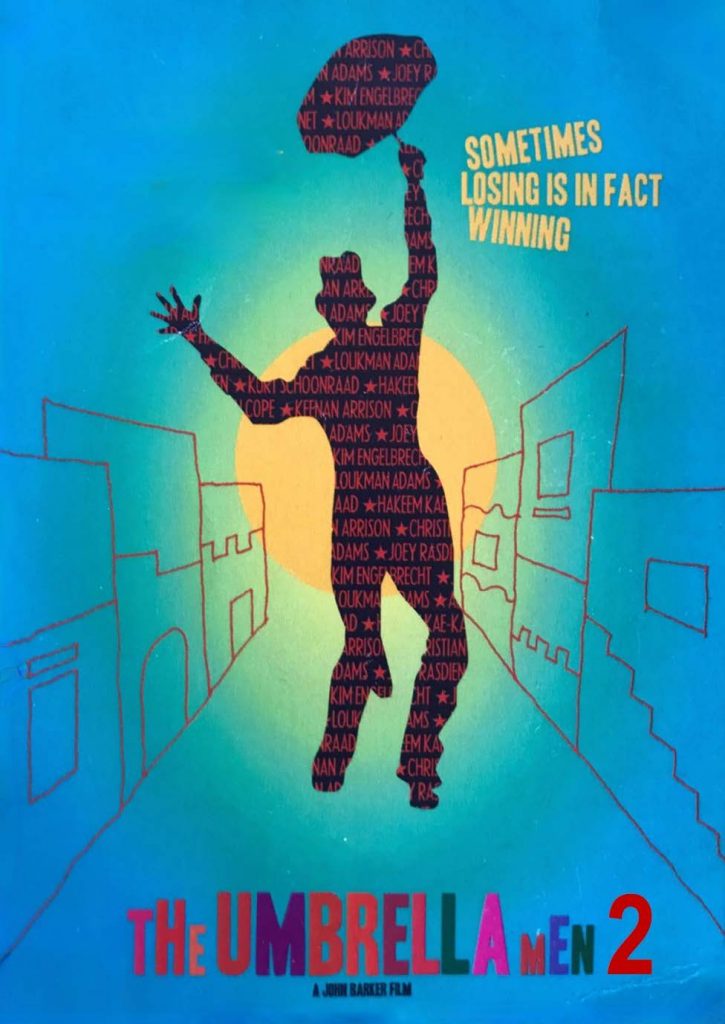 LOGLINE: After the successful Umbrella Men heist, our usual suspects, Jerome, Morty, Mila, Keisha and Auntie Val find life is sweet. But that’s when Takiek takes a hand. And before long, Jerome and Morty are banged up in the recently-reopened Robben Island Prison and Keisha, Mila and Auntie Val need to bust them out – and team up to take down an outa-control Tariek, who has plans of world domination and clear their names so that they can get home to the Bo Kaap as free men.

WHAT IF: Umbrella men Jerome and Morty are arrested and imprisoned on Robben Island, so Keisha, Mila and Auntie Val need to find a way to break them out so that Jerome, with the help of Ten’s successor, the beautiful Elf, can orchestrate a plan to foil Tariek’s nefarious plan to control the perlemoen trade by blackmailing the South African government, and negotiate pardons for themselves so they can live in peace in the beautiful Bo Kaap.

SYNOPSIS:
After the successful heist in the Tafelberg Bank, our usual suspects, Jerome, Morty, Mila, Keisha and Auntie Val are moving up in the world. Life is sweet. But that’s when Takiek gets news in prison from El Fontein that the cash used to pay off the Goema Club’s debt has turned out to be counterfeit. Seems that Ten has double-crossed them all and they’ve been buying a lot of kif stuff with dud kroon. In Pollsmoor, the General’s not at all happy to find out that his own generous share of the proceeds is worthless. He arranges for a compassionate day-release for Tariek, who promises to go and sort this all out (with no intention of ever coming back). And before long, Jerome, Marty and Tiger have been rounded up in co-ordinated police raids and are banged up in Robben Island Prison, recently-reopened because of chronic overcrowding in the Western Cape prison system.

But Jerome soon formulates a far-fetched plan that he hopes will get them off this rock. Lacking Madiba’s patience, he’s not willing to spend 18 years on the island. It involves a short swim to freedom through some shark-infested waters, but Jerome reckons that with Keisha’s support he can pull it off. So it’s time to approach the Birdman to deliver his letter, the sooner the better, especially since Tariek’s already escalating his own ambitions for global domination into a nefarious power grab which threatens to bring the entire country to its knees.

And it’s not long before Keisha, Mila and Auntie Val have enlisted Loukman’s pissed-off wife to use her perlemoen skills to teach them scuba-diving. They also need a boat and an accurate map of Robben Island’s underwater caverns for their part in the resourceful scheme. Meanwhile Jerome and Morty join the prison choir, which rehearses outside the walls and orchestrate an outrageous escape, in which everything which can go wrong does. Then it’s payback time, and an opportunity to repossess the Goema club from Tariek and get their fortunes back on track in an irresistible deal with the authorities which allows them to go home to the Bo-Kaap.